OVER YOUR DEAD BODY: The Many Adaptations of Yotsuya Kaidan 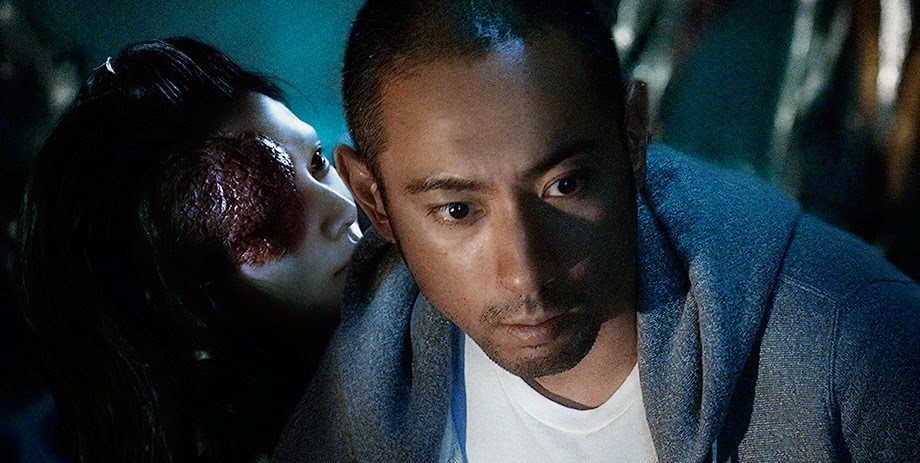 Takashi Miike could not have chosen a more respectable Japanese play to adapt than Yotsuya Kaidan, aka, Tokaido Yotsuya Kaidan. It is a story originated for the Kabuki stage and told many times before--the story of Oiwa, her faithless and cruel husband Iemon and supernatural revenge. Iemon has been hateful and appalling since 1825. And in almost every adaptation I see, he remains just as appalling a person as the first time I saw him in Keisuke Kinoshita's 1949 film. Miike's adaptation gets a special kick from having famed Kabuki performer Ebizo Ichikawa as actor Kousuke Hasegawa who performs Iemon in the film's troubled production of the play. In Over Your Dead Body, Takashi Miike offers his version of Yotsuya Kaidan in the form of a play within a film.


Tokaido Yotsuya Kaidan was written by playwright Tsuruya Namboku IV (1755-1839) and first produced for the Kabuki stage in 1825. It's typically performed with Kanadehon Chushingura, or The 47 Loyal Ronin. Ghost stories are respectable in Kabuki and Noh and so there are many tales of love, bitterness and vengeful ghosts, but like a certain Scottish play, Tokaido Yotsuya Kaidan is relatively unique in having a curse associated with it and cast and crew of any production of the story visit Oiwa's grave to stave off accidents and death. I could explain, but Namboku himself does it so much better in this sweet video with animation and museum artifacts...

The Legend of Tokaido Yotsuya Kaidan - Lady... by MstrMacabre

Since 1912, the play has been adapted to film many, many times. I would love to see the silent versions, but I thought I'd mention some of the more recent adaptations that I have seen so you can compare and contrast, after, or even before for maximum appreciation, seeing Over Your Dead Body.

In two feature-length parts, director Keisuke Kinoshita intimately details the life of Oiwa and a more sympathetic than usual Iemon, making Iemon's betrayal, and the dread of his inevitable betrayal for those familiar with the story, that much more painful. Kinoshita presents the story in almost psychoanalytic terms with the ghost of Oiwa being an expression of Iemon's guilt. But while it is tragic, it is still plenty spooky, with some startling images.

Nabuo Nakagawa's Tokaido Yotsuya Kaidan adaptation seems to be the biggest influence on Over Your Dead Body. With surreal, gorgeously composed and colored films like Jigoku, Nakagawa himself seems to be an influence on Miike. This version was the first in widescreen and in color and, holy cats, is it in color. It is lurid in the best way and far more familiar as contemporary horror. And Iemon is just a terrible, terrible person in this version. Far more terrible than usual.

Kenji Misumi directed another version the same year, and I feel bad for him because his was not a color spectacle and it's hard to compete with Nakagawa's--especially when Kazuo Hasegawa plays Iemon and it's just hard for Hasegawa to be a terrible person. Of course Misumi works with that by having Iemon not directly responsible for Oiwa's death and decide to avenge her. Doesn't save him, though. Not at all. And I'm sure it's totally a coincidence that there's a character named "Kousuke Hasegawa" in Over Your Dead Body, and that actor plays Iemon in the play within the film.

Tatsuya Nakadai plays Iemon and Mariko Okada plays Oiwa in Shiro Toyoda's version. He is a morally conflicted scoundrel who at first saves his sister-in-law from his father-in-law, but then finds his wife is in the way, again, of his moving up in life. (Spoiler: she's in his way by being married to him when he could marry someone with better family connections). This adaptation is plenty gory and Tetsuya Nakadai is always a pleasure to watch, but if you can only watch one lurid, bloody, stylized version of Yotsuya Kaidan, go with Nakagawa's.

Oh, there's so much more Yotsuya Kaidan out there, but this seems like a good place to stop.