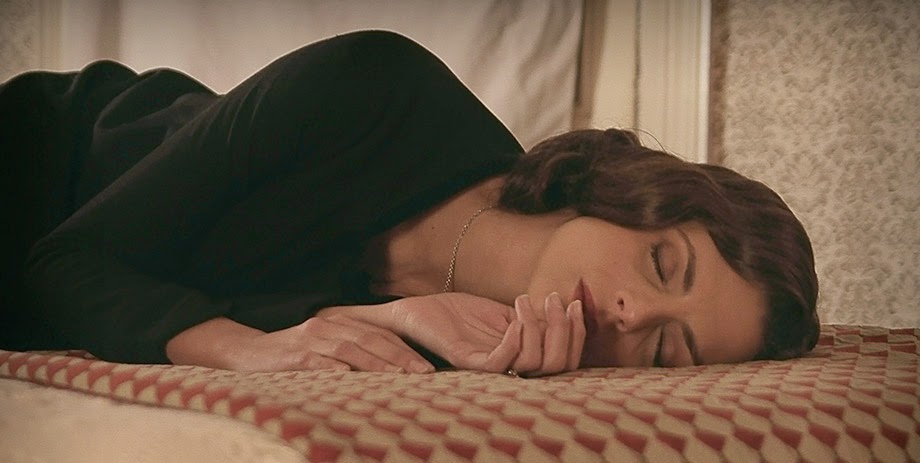 In Shrew's Nest, Macarena Gómez plays Montse, an agoraphobic seamstress. Devout and protective of her sister, Montse hides her own pain and her own secrets till she has dug herself in so deep she can never dig herself out. It is remarkable and intense performance from Gómez. A terrifying one in fact. Born in 1978 in Córdoba, Andalucía, Spain, Gómez started in television and continues to play roles in tv series and work in short films. But she's appeared in a fascinating variety of films, including her first, Dagon.

Her first film role was as the beautiful sorta mermaid Uxía Cambarro, a beautiful sorta mermaid...or octopus-maid... quadro... cephalopod-maid? Anyway, as in Shrew's Nest, she is very much the homebody, staying in bed as much as she can. Though she is less crippled by emotional tragedy than just unable to get around very well on dry land. (You'd think the people of Imboca would build some fishpeople friendly canals given the number of fishpeople and Deep Ones in town). Directed by Stuart Gordon and adapted from H.P. Lovecraft, Dagon is a story of star-crossed love as Uxía becomes very attached to a young man who comes to stay at her house, but cruelly breaks her heart.

In Miguel Martí's Sexykiller, Gómez is Bárbara,  a college student, horror enthusiast, doll collector and fashionista serial killer. As she tells the audience, the question is not why does she kill, it's, "Why not?" And she does have many provocations, from mean girls to ill-mannered male students in the women's locker room to jerks in flashy cars. And she has a mission we at the Vanguard Blog can get behind: eliminating sexism in the serial killer world. Then Bárbara meets Tomás, who she thinks is a serial killer, too. Will they have a romantic spree set to mid-Aughts pop and astonishing fashions? Is Tomás the one? Or will the fact that Tomás is actually investigating her murders interfere with True Love? Will zombies impede love's progress? 'Cause zombies are totally jerks about love.

Directed by Shrew's Nest producer Álex de la Iglesia, Witching & Bitching is a comedy about some nice ladies who are just trying to live their lives without people messing with them. Of course, every movie needs conflict and this one has José (Hugo Silva) and his ne'er-do-well friends. José is behind on his alimony payments to Silvia (Gómez) and holds up a cash-for-gold shop. stealing thousands of wedding bands while dressed like Jesus. And he brought their son along, too. Next thing you know, he's running from the law and his commitments and smack into a coven of witches. Meanwhile, Silvia starts to set up a new life for herself.

I haven't seen Holmes And Watson: Madrid Days, but I have made a series of deductions based on the trailer, Gomez' other films, web research--which can always be trusted--and my own talent for rampent speculation. First, I deduce that Gómez plays Berna an assistant and assassin in a vast continental empire of crime controlled by Irene Adler (Belén López). And I further deduce that Berna is an ambidextrous master of bartitsu who does not partake of spirits. She becomes the second woman to earn the respect of Mr. Sherlock Holmes. Unfortunately, I believe that her love affair with Dr. John Watson (José Luis García Pérez) will be cut tragically short by consumption. She was just too far along for modern science to save. Watson did all he could. No need to blame yourself, Watson. No need to blame yourself.


But maybe with Shrew's Nest love will find a way.