WHAT THE HECK IS RENGA? 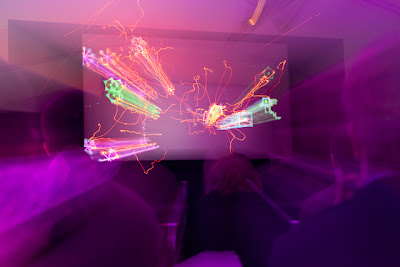 While flipping through the mammoth TIFF Programme Book (or tome, some might say), no doubt on your way to the Vanguard or Midnight Madness section, you may have noticed a page tucked just before Future Projections touting that TIFF’s gaming & new media initiative TIFF Nexus would be presenting something called RENGA at this year’s festival. But what exactly is RENGA? The official copy promises “the world’s first 100-player co-op laser game” with further claims as “a breakthrough in big-screen interaction”, but what does that all really mean you ask: “Is this a video-game? An interactive movie? Lasers? Who’s got lasers? I wanna laser!”

Calm down, gentle reader, all will be explained.

RENGA is a communal and collaborative gaming experience shared by 100 players wielding laser-pointers at a movie theatre-size screen.  It is no TimePlay multiplex shtick; this is a genuine interactive gaming experience that’s both challenging, engaging and even tells a story – a story that you, the audience, shapes.

The set-up is as simple as those of old-school arcade games like Galaga or Space Invaders, but fused with the strategic mechanics of games like Civilization: armed with a laser-pointer (provided to you at the screening), you and ninety-nine fellow laser warriors are tasked with building and managing the resources of a battered spaceship, whilst defending it from an encroaching on-screen alien force.  Broken up into discrete rounds, the audience must work as a team, communicating with each other and collaborating together on and off screen, in order to ensure their ship’s survival. The result has been described as a kind of improvisational dance.... with freakin' laser beams.

Best yet, RENGA isn't aimed strictly at hardcore gamers (don't let all this talk of 'resource management' scare you), every round of the game is monitored by a “game jockey” who paces the game out based on the audiences unique decisions and performance, ensuring that the game does not become so difficult (or too easy). And even better, the game jockeys will be RENGA creators Adam Russell and John Sear, who will also be on hand to answer your questions on how it all works, and what we can expect in the future!

RENGA already knocked socks off at SXSW and a number of game festivals worldwide, and on Sept. 14th @ 9:30pm and Sept. 15th @ 12:45pm Toronto audiences will get their first chance to discover an incredible foray into the future of interactive cinematic entertainment.

As the creators themselves pitch: Arrive as an audience, leave as a team.

Peter Kuplowsky is a Toronto film curator, producer, writer, intermittent TwitchFilm.net contributor and hat-enthusiast. A programmer for the Toronto After Dark Film Festival since its inception in 2005, his other significant cine-endeavors include co-producing Astron-6's MANBORG, the coordination of director Edgar Wright’'s Toronto editions of The Wright Stuff in 2009 and 2010 and being featured in Michael Paul Stephenson'’s Best Worst Movie (2010). Peter Kuplowsky currently works for TIFF Nexus, a gaming and new media project, at TIFF Bell Lightbox.
Posted by Carol at 10:52 AM