A look back at Lucile Hadžihalilović's INNOCENCE (2004)

Before the richly atmospheric Evolution, Lucile Hadžihalilović's provocative debut feature Innocence hit the big screens in 2004. The film is an adaptation of the short story Mine-haha or On the Bodily Education of Young Girls by German playwright Frank Wedekind, and follows the goings-on in an an all-girls school tucked tightly within a thick woods, where new students arrive in coffins. Featuring the likes of the award-winning Marion Cotillard (Inception, La Vie en Rose), this wispy examination of pre-pubescence teeters on exploitation as it peeks in and out of the skirts of young girls, and keeps hold on its audience in its surreal, dreamlike qualities. 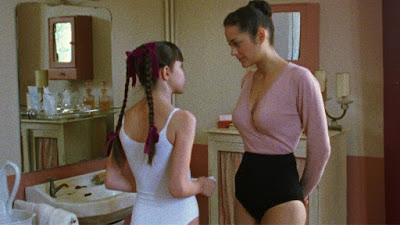 Although the director herself as stated that she does not wish to give answers to every bit of symbolism in her movie, it allows the viewer to draw their own conclusions on what each theme means to them. Following in the ilk of being a deeply metaphoric ride with more weight placed on effective atmosphere, Lucile Hadžihalilović's sophomore film Evolution exercises her knack for submersing audiences into her unique universes.