Writer-director A.D. Calvo's film The Missing Girl follows Mort, a comic book store owner who fills the void with rare pieces of pop culture paraphernalia and daydreaming about his beautiful employee Ellen. When Ellen misses work one day, Mort becomes consumed with fear that she is in danger, because of something similar that happened to him earlier in life, which is completely exacerbated when his former classmate Skippy returns to town. 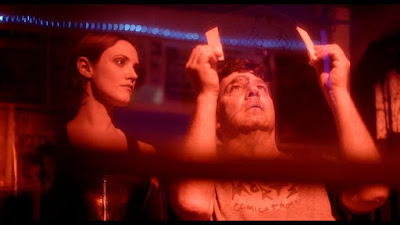 Mort is played by Robert Longstreet, who has worked on several aspects of the filmmaking process and been in dozens of roles in his time, acting in films such as Take Shelter, Ain't Them Bodies Saints and This is Martin Bonner. Longstreet has been decorated with the Sidewalk Film Festival Jury award for his work in both What Happens When Robert Leaves the Room (2012) and Cork's Cattlebaron (2011), and has been nominated for multiple awards for his work.

Alongside Mort is the beautiful Ellen, played by Alexia Rasmusssen, who is perhaps best known for her role as Esther Woodhouse in Proxy, a young pregnant woman who is brutally attacked on her way home, in one of the most disturbing scenes in horror movie history. (Incidentally, Proxy premiered at Vanguard, too). Rasmussen has also worked behind the camera for the short film Silo, which follows Silo, a drunk white man who can't find his missile. She was also nominated for her work in Listen to your Heart in 2010 at the Action on Film International Film Festival for Best Actress.

And last but not least, the former high school classmate Skippy is played by Eric Ladin, who most will recognize as the ritzy brother of January Jones' character on AMC's Mad Men. Ladin is perhaps more known among avid TV watchers, as he is also a part of Big Love, Bones, The Mentalist, Criminal Minds, and several more.