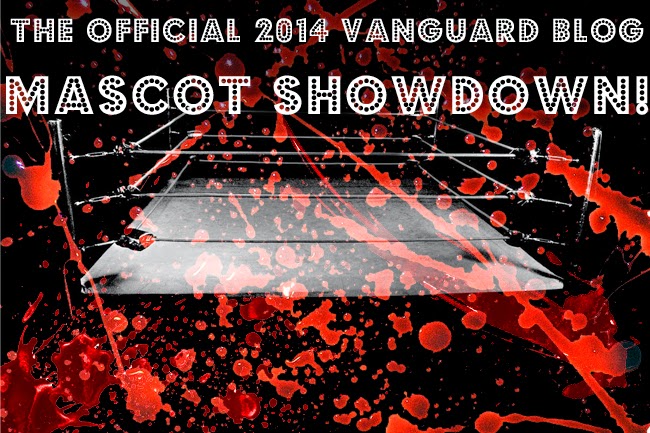 Well jabrones, it's been a harrowing few days. We dropped Benson, Moorhead, and the mole cricket on an island with nothing but a match, a rubber band, a party size bag of M&Ms (plain, if you're curious), and a bowling ball and set them loose in a battle...TO THE DEATH. Okay, not actually. But only because that would be really, really expensive. We mean, as much as we here at the Vanguard Blog would love to just be dropping directors and insects on islands left and right, we have our expenses to think about. Cats too. Children and significant others? Maybe.


Enough shenanigans! It's time—finally—to announce the winner of the 2014 Vanguard Blog Mascot Battle. Who will come out on top?! Why do we still not know the best breed of cat for lifting?! Why does the mole cricket look so adorable in his boxing gloves? At least one of these questions we can answer and we will do it right now! RIGHT EFFIN' NOW!

But first, let's recap our intrepid contenders. You know, to draw this out as much as possible.

Justin Benson is apparently a respectable skateboarder and we're pretty sure he told us he also does yoga. Does he have what it takes to knock the other contenders out of the running?! DO THOSE TOWEL CONSERVING SKILLZ REALLY PAY THE BILLZ?!

While we admire Aaron Moorhead's ability to put on sunglasses whilst lifting cats, we wonder how he held up in this battle to the death. Maybe the age old question of "cat versus towels: which is better?" will finally be answered!

The mole cricket is just so damn cute. Lookit those boxing gloves! Ehehehehehehhehehehehehe. \

Or maybe last year's victor, Joe Swanberg, will somehow use his unstoppable charisma to reach all the way from Chicago and snatch the title back?! It's anyone's game at this point. Do you have any idea who will come out the victor?!? Neither do we! Oh, yeah. Wait, yes we do. The winner of the 2014 Vanguard Blog Mascot Battle is....


This has been the 2014 Vanguard Blog Mascot Battle. Congrats to all of our contenders but, sorry, not sorry, this pencil is really rad and we wish we had one and doesn't it look great in a crown? Deal with it. AND IN ONE YEAR WE WILL RETURN WITH THE NEXT VANGUARD BLOG MASCOT BATTLE. EXCELSIOR!

(PS - if anyone were to know of the location of such a glorious pencil (and not one of those barely larger than normal sized ones Amazon sells, pfft, please inform Siân immediately. Thank you.)